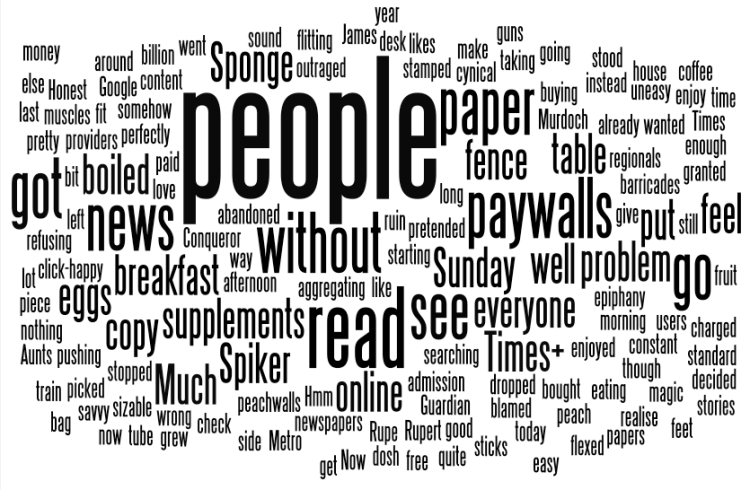 I got scared the other day,  I glanced at a headline that said the Washington Post was considering a paywall.  That would have meant one less quality news site on my favorites list .  I used to be an online New York Times reader, but that no cost pipeline was closed.  I moved on to the Washington Post and like it better than the Times.  When I saw ‘Is a paywall coming to the Washington Post’,  my heart sank.  I decided to read the bad news, only to find it isn’t so bad.  The newspaper’s  Ombudsman, Patrick P. Pexton surprised me in writing that having no paywall is a revenue enhancement strategy.

He cites the New York Times annual report as proof that paywalls may not really deliver.

The New York Times Media Group — the division that includes the New York Times and the International Herald Tribune — increased its circulation revenue (revenue from people buying newsstand copies, print subscriptions and digital subscriptions) from 2010 to 2011 by $21 million, or about 3 percent. It saw no growth in circulation revenue the year before. Let’s assume that most or all of that increase was from new digital subscriptions. It didn’t even cover the decline in Times advertising revenue in 2011, which was $24 million.

With the situation basically the same at the Post, it probably makes sense to try something different, putting the sugar on the patio will certainly attract more ants.  Especially if all the neighbors are keeping their sugar in a screw top canister.  If the paper can get more advertising to the eyeballs of those ants, we have a winner!  Times have changed from when I read three to four newspapers a day.  The fact is the industry needs to find a way to generate content and that costs money.  Smaller local papers have become shells of what they once were and are almost pamphlets on some days.

I am one of those who never thought they would be without the daily delivery of a newspaper.  About 18 months ago I glanced into my recycle bin to see all my papers, still in their plastic bags, sitting there.  I cut the cord.  As far as my online news, if and when the time comes, I realize that if I want quality, then I will have to pay for it.